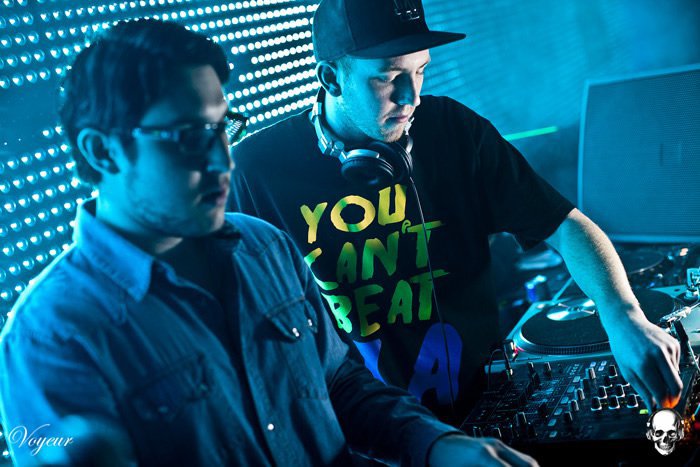 Well, the time has finally come for the first of many Raw Goodage Exclusive Artist Interviews. Various producers will take time to answer some of our questions and let us know about future endeavors. I decided to premier this series of interviews with a local group, No Body. I had been following these guys individually for quite some time before they became a duo. Both are very talented, which was clear after they unleashed their first few originals, such as “Two” and “Goh.” I posted about them a while back, when they gave away their bootleg for LMFAO‘s “Party Rock Anthem,” which was amazing. Tons of people were excitedly asking me about it, but I knew as well as they did that we have much more to look forward to from these dudes. They have been making some serious noise, with remixes and with originals. Check out the interview as well as some great tracks after the jump.

RG: Hey guys. Thanks for taking time off to talk to us. First, what are your names and where are you from?
NB: Ruben: I’m Ruben Smulovitz Kevin: And I’m Kevin Chapman. Ruben: I grew up in Orange County and moved to Los Angeles to attend University. Kevin: I have lived in Los Angeles all my life and I also attend school in the city.

RG: What are your backgrounds in music and how did you end up with electronic music? Are you self-taught producers?
NB: We both grew up loving Electronic Dance Music at an early age, from Daft Punk to Tiesto. We really immersed ourselves in the culture when we both started DJing around 3 years ago at about the same time. After a while, we got pretty decent at it and we each decided to play club shows. In fact, we both played our first gig (solo) at the same event opening for Designer Drugs. We are both self-taught producers in every sense of the word. Through hard work and determination we (independently from each other) familiarized ourselves with such programs as Ableton, Logic, and Reason over a span 2 1/2 years before our first proper release.

RG: How did you guys end up meeting and deciding to form a duo group?
NB: Ruben: Funny story actually. I threw a contest on my blog DSCOTECH together with the people of CONTROL. The winner of the contest would receive a chance to spin alongside myself, DSCO, at the Legit Lounge of the Avalon. Through the course of several weeks, I reviewed a large amount of entries and was quite impressed by a producer under the alias $pecial K (Kevin Chapman). His productions were on point and blew everyone else’s out of the water. Naturally, I chose him as the winner of the contest and rightly so, he was the best. After spinning our sets, we began chatting and we hit it off, discovering that we both lived down the street from one another. The following day we met up and made our first track. And the rest is history so to speak.

RG: Do each of you play a separate role in terms of production and live performance, or are you both involved equally in both aspects?
NB: We have equal parts in both our productions as well as our live performances. We sit down and work on all our productions together, but we usually come prepared with well thought out ideas and samples before even meeting. Now when DJing, we switch off after each of us drops a few tracks. It’s a cooperative effort as we both are either selecting the next track to cue or mixing.

RG: Do you have a DAW of choice, or do you prefer combining several?
NB: Logic acts as the master host and Reason/Record acts as our sequencer. We combine the two in order to receive the benefits of both, such as VST support from Logic and rapid workflow from Reason/Record.

RG: What does your live set up look like? CDJ’s or Laptops?
NB: Another funny story. We started performing as No Body with a laptop/midi controller setup (Traktor S4) running Traktor Pro. It worked well for the kinds of gigs we were playing and we really couldn’t afford much else at the time. We eventually got invited to play at Voyeur SD (an amazing club run by amazing people) on 3/24 opening for Villains. Halfway through our 2 hour set, our laptop began to overheat (which in hindsight was caused by a broken computer fan) causing Traktor to over-compute and shut down completely, cutting the music completely. We effectively learned our lesson following the incident and made the switch to the industry standard. To be honest, we wish we would’ve done it sooner because it truly adds another element to our live performance. It allows us to be one with the crowd instead of just hiding behind a laptop.

RG: Is there a certain piece of hardware or software that you simply cannot live without?
NB: KRK Rokit 8’s. Our productions have benefitted tremendously after introducing these puppies to the studio. They are just meant for EDM.

RG: Making it in this business is no easy task with all the competition. What advice do you have for aspiring producers who don’t know which step to make first?
NB: We wholeheartedly agree with you, this business is indeed extremely competitive. In a way it’s a good thing because it makes producers push themselves beyond their perceived potential and it allows exceptional producers to really stand out. Our tip to aspiring producers would be to fall in love with the music you are most interested in. That way you can begin to craft your own individualized tastes and sounds (what you like and what you don’t like). This passion will directly translate into your productions. Also, don’t just make loops; finish the track no matter what the quality is. By doing so, you learn the process of making a track from beginning to end, which is the hardest step for new producers.

RG: Who are some of your musical influences and who would you want to collaborate with most?
NB: Kevin: My top three favorite at the moment are Avicii, Hardwell & Sidney Samson, they are absolutely killing it. In terms of collaborations, PeaceTreaty is the shit right now. I’d love to do a collaboration with those guys. Ruben: I would have to say Gesaffelstein, Brodinski, and Munchi. They are so incredibly creative and they are constantly raising the bar in EDM. I’d also like to do a collaboration with PeaceTreaty, since becoming good friends with the dudes.

RG: Do you categorize your music into a specific genre?
NB: Each one of our tracks fall within a specific genre (from Electro to House to Progressive House to Moombahton). Overall we like to label our sound as Big Room Electro House, combining Progressive House elements such as builds, melodies, and chord progressions with hard hitting Electro drops. We also make sure that all our productions are as club-worthy as possible. But to be honest, we don’t really concern ourselves with genre labels. If it’s good music, it’s good music.

RG: Before No Body was formed, you both had lots of tracks on your individual SoundCloud accounts. How has your sound progressed since then?
NB: Day and night. We had no idea about the intricacies of EDM such as the mastering process or even the correct use of compressors. We’ve gone from making horrible melodic pieces of shit to making polished tracks that even some of the world’s best producer/DJ’s have played in front of thousands. Our sound today is a result of time spent, dedication, and over-arching passion for the music.

RG: Are there any upcoming shows or releases that you are looking forward to that we can know about?
NB: On 4/14 we are headlining our first out of state gig in Madison, WI. We are stoked about it and we can’t wait to show the crowd what we’ve got. We are also releasing an EP with Dutch label Touche Records featuring our tracks, Two and Midnight Hour. The remixes are phenomenal and the originals have been well received. Artistic Riot Records (The Deficient’s label) will also be releasing two other No Body originals soon as well. We have some other secret endeavors that are in the pipeline that we are also really excited about, but unfortunately we can’t speak of them just yet : ).

RG: Lastly, what do you hope to accomplish for the duration of 2011 and what would it mean to you to play a festival like EDC?
NB: In 2011, we would love to play the mainstage at CONTROL. As longtime patrons of the weekly event, it’s been our dream ever since entering the scene to do so. It would mean the world to us to play a festival like EDC. To be put in the same category as some of the greats like Benny Benassi, Moby, and SHM is the greatest honor in the business. Maybe one day. Fingers crossed :P.

RG: Thank you guys again for speaking with us and we wish you the best of luck!
NB: Thanks a lot! Hope you and your reader’s can come party with us soon.

Well there you have it! Thanks again to No Body for chatting with us. Check out some of their tracks below, all of which are available for download. Their track “Don’t Go” was made available exclusively for us at Raw Goodage! Make sure you ‘Like’ these guys on Facebook and follow them on Twitter.