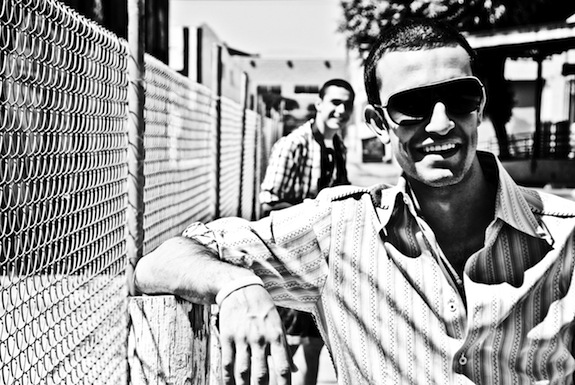 We are thrilled that our buddy and LA local Alexandre Williams (Dirtyrock) was able to answer some questions for you readers. He has been extremely busy producing, recently releasing titles with Ecto Cooler, Shift Four and more. His name says it all, filthy electro basslines combined with clear elements of rock influence comprise his signature sounds. We have tons of respect for this man, not just because he is talented, but because he respects his job. He knows what it means to be a quality DJ/Producer, a concept that is slowly being clouded by a haze of laptop controversy. If you’ve seen him live, you know how entertaining his sets are, especially since he likes to mix on traditional CD players. Hear what he had to say after the jump, and grab his newest track “More Unfamiliar” featuring remixes from Alex Zelenka and Bassive on Beatport.

RG: First off, thanks for taking time to chat with us! When did you decide to start producing?
DR: Thanks for having me. I began producing around 2 years ago when I wasn’t satisfied with DJing alone. I really wanted to begin putting down my own music in the sets and have been locked in my room ever since. At first I was producing progressive and trance music, but I always found myself playing electro, so I progressed to the more heavy complextro stuff, and I’ve been very pleased with the progress ever since.

RG: Producing is where the real work is, but playing the tracks you make to the masses is exhilarating. What’s your favorite part about your job?
DR: I love being able to drop my own tracks and enjoy the overwhelming response, It feels much less superficial than just throwing down other peoples music all the time, and I feel my sets have become much more unique because of it. I think my favorite part of the job is interacting with the audience. I really love to dance and go crazy on stage, and will definitely start taking a hand in stage diving. I was suppose to do it in San Luis Obispo with AC Slater a few weeks ago, but since a homie got kicked out immediately after my set I left the club early to continue our drunk shenanigans elsewhere: Bro’s before Show’s ;). I’ll get my crowd surf fix at the next event.

RG: We read your article about the saturated DJ market and how laptop DJs are making a negative impact on the industry. Since technology is inevitably making the job easier, what do you think needs to happen to preserve the difference between quality and quantity?
DR: First and foremost: Buy your music: YES, ALL OF IT!! 9 out of 10 DJs I know pirate all their music, and it’s embarrassing to not support your own industry. Not to mention the audio quality of the majority of illegal stuff is way less than a standard 320 kbps MP3 track. Trust me, anybody listening to your set (aka, everybody in the club) can hear the difference between HiFi and LoFi. Lower quality audio output creates constraints on the brain that causes much more frequent ear fatigue, which translates to an audience of people getting edgy and stressed very easily, no matter how awesome your set. New DJs just coming in should educate themselves and understand the difference between all audio formats. WAVs and AIFF are king, but typically more expensive to buy, because of the higher quality. Also a couple of pointers to laptop DJs: If you feel that a laptop is the only way that you can perform on stage, then make sure to buy a HiFi D/A converter and stay away from the cheap cards that come with your software, it will make a tremendous difference in the quality of sound. Also, try not to place your laptop on those stands that perch right in front of you, it really hinders your connection with your audience when you are staring at a screen. Try putting the laptop to the side and out of view, and consider going for an S4 or APC controller that is a little more hands on that doesn’t require you to look at your computer all night. Lastly, turn your screen brightness down. Most clubs now carry intense synchronized lighting displays that synch with the audio and create stunning atmospheres, and it really ruins the visual performance going on around you when you have this bright white flash penetration through it on center stage (and the reflection of the bright laptop backlight makes DJs look like they need hardcore tans). Participation is key to hosting a great show, after all: If you aren’t into it, how can you expect your audience to be?

RG: In such a competitive market, support from friends and media is extremely important. You had a residency at the infamous Avalon Hollywood for a while, with support from Gotta Dance Dirty. How have brands such as GDD and Into The AM helped progress your career to where it is now?
DR: Support has been and always will be crucial in the process of gaining exposure and a fan base. Working with these guys has shot my career up exponentially. Being at Avalon opened a lot of doors and really pushed me to take my production to a higher level. People like Skrillex, Porter Robinson, DJ Aero, and Deadmau5, amongst others, would frequent through the venue and I wanted so badly to ‘be a part of the crew’. Then when I joined Into The AM, they really took a shine to showcasing all my new releases and have been promoting me all across the state. Having support is extremely important in this industry, and I am very grateful for all the shows, promotion, and support, that these companies, as well and my fans, family, and friends have given me.

RG: Your recent collaboration with Ecto Cooler “All Your Bass” made a huge mark on the Electro House charts. Are there some other producers you plan on working with in the near future?
DR: We ran off pure nerd power for that track, and wanted to appease to the “All Your Base” fans after watching that web hit and cracking up endlessly. Right now I have a collaboration with Candyland that is pure filthy bass that will be getting released next month sometime. I am also working with Silas Egan, a 16 year-old complextro whiz kid from Canada that is showing a massive amount of potential as a producer. There is also a co-produced progressive/electro track with Alex Zelenka that will be completed soon. I have a track planned with Liberty, and have a very insanely awesome side project that I will be undertaking that should be completed in 2013. I am also continuing my collaborations with Shift Four, and we are in talks of planning a live set sometime next year.

RG: It seems like choosing a DAW is a battle in itself these days, but we know that the end result is all that really matters. What software did you decide was best for you?
DR: I am a huge Ableton fan. My only problem with it is the internal routing, I find myself hearing a lot of background static and find that levels peak on the master, even when they aren’t peaking on an individual track. I usually bounce out my files and export them to Logic for final mixing. I find that it comes out much cleaner, probably from the 64-bit support. If they had FL Studio for Mac I would probably switch over because I keep hearing great things about it, but they don’t unfortunately, and I despise Windows, so I will keep dreaming.

RG: Which artists have influenced your music career (electronic or other)?
DR: Dance music-wise I would have to say Daft Punk, Justice, BT, Armin Van Buuren, and recently Porter Robinson. When I was younger it was 80s Rock and Oldies on the radio, these were the only 2 genres my mom and dad listened to in the car, so it was a huge influence growing up.

RG: Finally, we always like to ask what your ideal alcoholic beverage would be to start the night!
DR: Black Label and 7-up. If you haven’t tried it – do it, its legit.

RG: Thanks again for speaking with us and we wish you the best of luck!
DR: Always nice to chat with Raw Goodage, and thanks again for the continued support!

All Your Bass (Original Mix) – Dirtyrock, Ecto Cooler !OUT NOW ON BIG ALLIANCE RECORDS! by DIRTYROCK