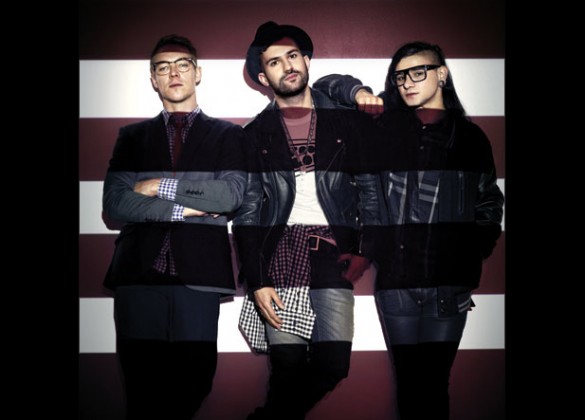 On Saturday night, the Belasco’s Grammys pre-party was headlined by the three electronic artists who jointly held the most recent cover of Billboard Magazine, boasting a combined seven nominations between them. The Belasco’s line ushered us into an alleyway behind the downtown venue where we entered through the doors of a storage container, reminiscent of a top secret club in a movie. Waiting inside were Skrillex, Diplo, A-Trak and Dillon Francis pushing the limits of what the venue’s website describes as “the largest and most powerful sound system in Los Angeles.” See a video of Skrillex’s ENTIRE SET and read our review of the performances and venue after the jump!

The big news of the night was that A-Trak and Diplo played a two hour set together and their styles blended together seamlessly. Both artists have a background in Hip Hop and have been mixing for a combined twenty-five years. Expect a collaboration between the two within the next few months. We’ve recently had a thing for artists performing joint sets together. Shared sets allow for the two artists to synergistically build off each other in the same way quality mash-ups bring something unique to the table that wasn’t present in either song individually. This set was no exception. The duo led off with a medley of songs expertly chosen to hype up the crowd, like “Kick Out The Epic Mother Fucker” and Zedd’s remix of “Breakn’ A Sweat.” Dressed in his signature slick black suit, Diplo looked out of place, but he was right at home playing in front of thousands of fans.

A-Trak brought a treat for his fans that is almost extinct in dance music: vinyl decks. A-Trak is one of the best in the world when it comes to vinyl. He is the only DJ to have won five World Championships, his first coming at age 15 in 1997. A-Trak scratching while Diplo queued up more funky remixes made it a night to remember. The old school style of the set was accented by the videos playing behind the artists. Several animations of old school video games reminiscent of MechWarrior and Transformers popped up to remind the crowd of the artists’ age throughout the night. The Bingo Players’ “Cry (Just a Little)” was accompanied by graphics from Duck Hunt. Our favorite mix of the night was Sebastian Ingrosso and Allesso’s “Calling” crossed with a mashup of Justice’s “We Are Your Friends” and Major Lazer’s “Pon De Floor.” Towards the end of their set, Skrillex came on stage to get a look at the crowd. Diplo teased the crowd with the bridge from “Ruffneck Bass” before dropping into A-Trak and Armin van Helden’s “Barbara Streisand.”

The Belasco just emerged from a $12 million renovation after sitting dormant for two decades. As we mentioned earlier, the entrance to the Belasco is fun and stylized, leading you through the doors of a shipping container and taking you through a tunneling hallway to the main theater. When we arrived, we came out of the tunnel and were presented with a framed view of A-Trak and Diplo taking the stage. The screen behind them read “The following Information is Top Secret: Classified.” We appreciated the architectural narrative and what it added to the experience of a night out. The venue is an old 40,000 square foot theater reminiscent of the Hollywood Pantages and has stood in its current form for over 85 years. The Belasco’s remodel boldly mixed the antique Spanish Renaissance and Moorish styling with lighting that their website mentioned was inspired by Cirque du Soleil. The juxtaposition of old and new feels just right for a nightclub that used to be a theater, a church, and a burlesque night club. 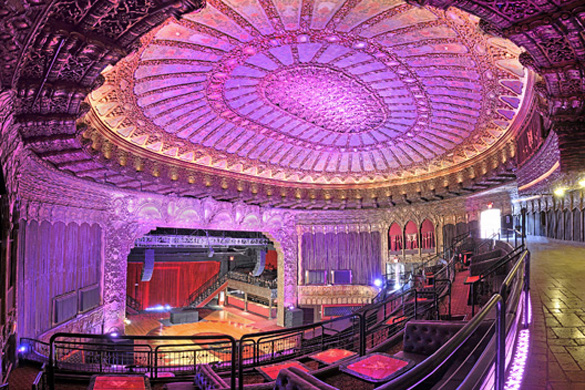 Unfortunately, we had to divert our attention to finding earplugs as soon as we arrived. The volume was truly impressive for a room of that size. While Avalon is known for the volume of its piercing highs, Belasco will no doubt develop a reputation for its tectonic lows. A powerful sound system is a great thing, but with great power comes great responsibility. During Skrillex’s “Hey Sexy Lady,” the bass caused me to cover my already plugged ears. Several people behind me also had their hands over their ears, and we were in the back. We love our bass, but we have to advocate protecting your hearing. Earplugs are available for free from the coat check, which is located at the back of the venue on the upper level.

The venue is organized vertically around two stair cases in the back corners. The stairs run all the way from the bar in the basement to the rooftop patio. This is reminiscent of Las Vegas’ Marquee’s winding staircases, but it feels more like the meandering stairs of Hogwarts because everything is made of stone and decorated with gold paint and red carpets. The basement bar is one of many rooms the Belasco offers for socializing that has brighter lighting and a lower volume than the main room. One of the other bars is clearly where patrons would have drinks during the intermission of a play. The rooftop patio is also one of the best outdoor areas we have seen that allows you to hear the music from the main stage. The venue’s location allows them to have music spilling out into the night sky without disrupting their neighbors.

There is nothing quite like a crowd right after Skrillex takes the stage and his music playing on the Belasco’s sound system was nothing short of face melting.  This set had bass, Biggie Smalls, Sonny giving a shout out to LA via hand signs, and a man in an LED robot suit shooting lasers and a fog guns up into the air. We could explain his set to you, but we figure you’d rather see/hear for yourselves. Check out the video: