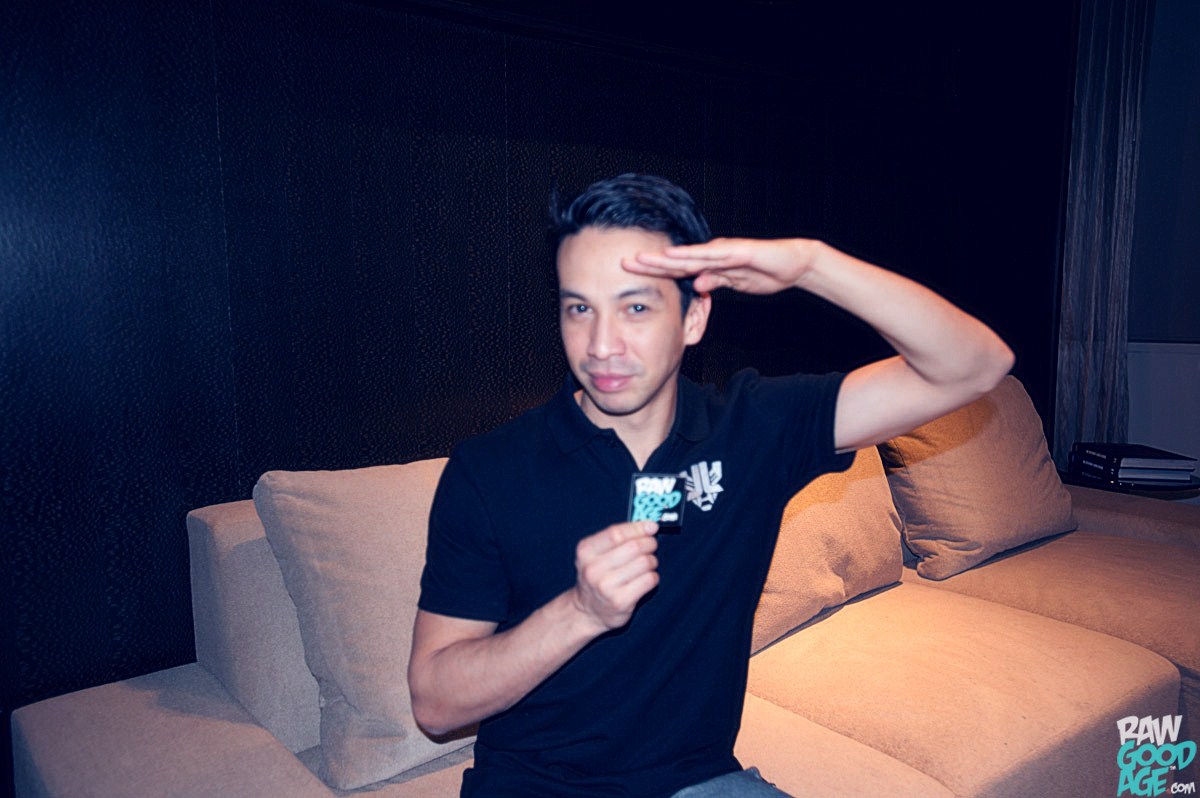 If there’s one thing we know, it’s that the Dutch know how to do dance music right. From his Mixmash label, to his overpopulated music forum, Laidback Luke is a busy man to say the least. Luckily, we got to sit down with Luke for a few minutes before his show at the Palladium last Saturday to talk about his upcoming tour, releases, and engagements. He ended up being one of the nicest and most humble people we’ve chatted with, fully living up to his reputation. This is the guy that we’ve always looked up to. Check out what he had to say after the jump!

Los Angeles has waited a long time for you to bring your Super You & Me party to the West Coast. Can you explain to our readers what a themed party adds to the experience?

To me, the earlier European house music parties were always themed, and the anticipation of dressing up before an event used to bring an extra kind of energy and anticipation to the night. This kind of faded away in Europe, and I’m trying to bring back the crazy fun that comes with dressing up. I mean a lot of parties became way too serious and way too cool. I just want to have fun with my friends; often the crazy stupid fun nights are the greatest nights. At Super You & Me you can be whoever you want to be. We have done so many events already, it is fun to see friends and fellow DJs dress up and look crazy.

You’ve played enough shows in LA to know that this city really loves you and is always eager to have you back. How is it different playing here compared to somewhere like Pacha NYC?

It is very different. Although I am almost half a New Yorker now, and it is one of my favorite areas to play, California seems to be way bigger and there is just a really tight scene out here. Although it is very tight, it’s huge as well, and it has always been. It always feels like a warm welcome and such a loud and passionate crowd too.

This tour is only a few days in, but it’s your first traditional “rock star” type bus tour. What has the experience been like so far?

Well, to be honest we’re going to get into the bus tomorrow. I’m excited. This is a whole new thing. In all my touring I’ve only done flights and stayed in hotels. To sleep on this bus will be something totally new; I’ve heard fellow DJs talk about it and it sounds like a lot of fun.

Is there a certain track of yours which you’d consider the breaking point of your popularity in America?

I would say that would be “Be” versus “Show Me Love” with Steve Angelo. That was definitely the turning point. Before that was “Break Down The House,” but “Be” was the biggest track in my sets for almost two years. 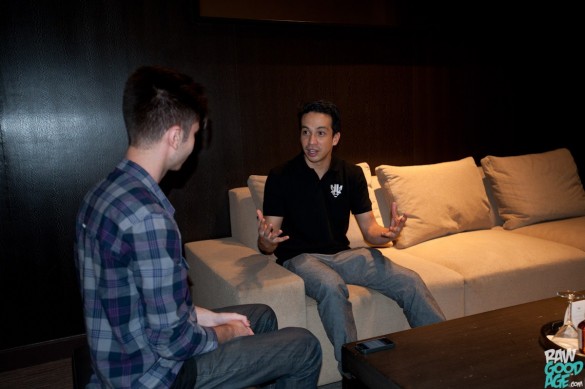 In terms of DJing, your performances are unlike most others in that you are very technical with your skills on the CDJs. Instead of long, slow transitions, you sometimes like to create your own build ups and juggle around different drops at will with hot queues. What do you feel about the new generation of laptop DJs who might not ever get the chance to understand the principles of beat matching and traditional turntabling?

To me, electronic dance music has always been about the newest technology. When we first started making this music it was a revolution that we were using a computer instead of actually recording tracks. To me, it has always been that way and I’ve always been about the cutting edge technology, so I am very much open to that. I had my fair share of beatmatching; I used to be a techno DJ and could mix with three vinyl decks. Now in 2012, I don’t think beatmatching is really relevant anymore. It’s more about the momentum; it’s more about what you can create on the spot. I feel a laptop can help with that. You will see that there will be more creative people who come along and take it one step further. If I didn’t have to worry about beatmatching then I could worry about other stuff, more creative stuff. I’m very open to that and very curious to see what new technology will bring. At the same time there are tons of DJs out there that just push play on a CD player. I always try to think of my technique as my ammo, and that I can bring a whole lot extra because of that.

What do you think the role of vocalists will be in the future of dance music, especially with more and more big artists from other genres wanting to collaborate with EDM producers?

In the US it is way more open for vocalists to do a vocal on a dance music track. I remember some interviews back in Europe that said Dance Music is the new Hip Hop. The funny thing with tracks like Eric Prydz’s “Pjanoo” or Avicii’s “Levels” is that the track is so good there is no need to add vocals, but the radio and TV still want to hear vocals. I just love vocals, man. I sing in the shower, and you won’t catch me singing the melody to “Levels.” I do think that vocals add to music and I’m definitely for having good vocals on the track. 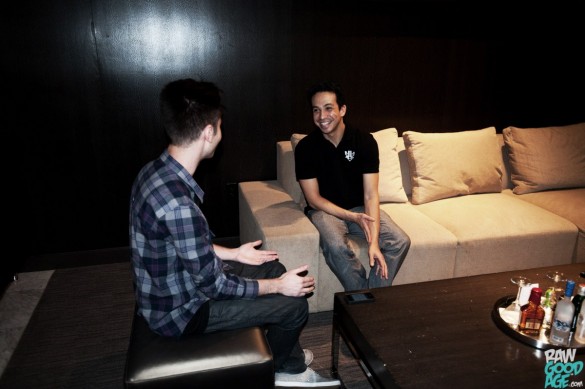 You’ve tweeted over 80,000 times and have almost a quarter of a million followers, gaining the reputation of the DJ that always answers back. What do you feel the relationship between an artist and his fans should be?

I can only speak for me; a lot of artists don’t do it like I do. For me it is very important to be in touch. I mean, coming up, I’ve always run into arrogant DJs and I’ve always promised myself I would never become such a guy. Even for myself, some of the people that I look up to on Twitter, and have tweeted, haven’t tweeted me back. If they only would have said a simple “thanks,” or “hey cool,” that would have made my day. I realize that I can bring that to people; I can give that type of energy back, so I do.

Your forums have become an active place for young up-and-coming producers to seek feedback and advice from you personally, including the likes of Avicii, Afrojack, and Bingo Players. Despite the amount of your time required on your end, do you feel that it’s important to continue mentoring and supporting the next generation?

Absolutely, even if it just means I can help one kid. What you don’t see is that there is an under layer of people and new talent that don’t make it like Afro or Avicii did. A couple of them are very desperate, and I’ll be a mentor for them too. I’ll tell them you have to keep up, you gotta do this, you gotta do that, and there are some guys who have hit rock bottom and I’ve been like “you need to try this.” And that is the side of this game that you don’t see, which is very important to me too. I’m very much about helping people and giving them a sense of what they can do and want to achieve, and I’m very happy to do so. Even if it’s just one kid I can help.

Any exciting upcoming releases on Mixmash?

I had a new year’s resolution to release a track at least once every two months, or at least more than 2011, and it is happening. 2012 is going to be jammed packed with new releases. We’re on the verge of signing the new Avicii and Nicky Romero track that I’m playing already. I’m doing a collaboration with Angger Dimas which is insane. There are tons of new releases coming out, we are very excited.

Congratulations on your recent engagement to DJ Gina Turner. People are wondering, who would you guys choose to DJ your wedding?

That is a very good question because our guests and the DJs that are coming are enough to fill a festival lineup. So, we’re going to have one of the Godfathers there, someone we all look up to. I can’t say who it is yet.